Thanks to an exceptional first half of the second period, Lens came to the end of Rennes (2-1) this Saturday, during the 4th day of Ligue 1. A week after its Monaco festival, the arts club is sending a new message to the competition, provisionally taking the lead in the championship. 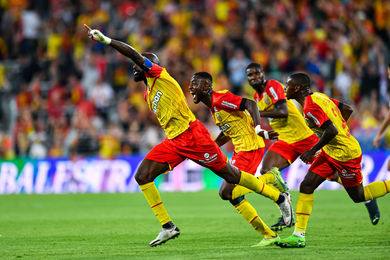 We will have to count on Lens this season! Only one week after his trip to Monaco (1-4), the Arts team offered the scalp of another competitor in Europe, namely Rennes (2-1), this Saturday, during the 4th day of Ligue 1 Untenable on returning from the locker room, the Sang-et-Or played a solid match to temporarily take the lead in the championship with this third success.

In a very nice Bollaert atmosphere, the two teams set a lot of pace going from one goal to another. An intensity worthy of a European match but few opportunities to get your teeth into. If Openda was looking for the penalty on an intervention by Theate, Dou was the first to light the fuse on a tense shot from 20 meters stopped without problem by Samba.

The game, balanced and disputed, still had trouble getting off the ground despite the minutes ticking by. In this increasingly tense duel, the twirling Openda gave the impression of being able to change things thanks to his quality of percussion. Opposite, Doku was gaining momentum and could have obtained a very well placed free kick for a foul by Abdul Samed that Mr. Brisard did not whistle.

Upon returning from the locker room, Lens raised his voice. It took a double save from Truffert to keep Rennes in the game. Very pressing, the Sang-et-Or largely dominated the debates and came very close to scoring on two huge chances for Medina and Openda. By dint of suffering, the SRFC cracked. On a personal feat, Fofana sent an unstoppable cannonball for Alemdar (1-0, 66th). A sensational goal!

In an enclosure on the verge of explosion, Openda put a coin back in the machine, taking advantage of an error of judgment by Rodon to adjust the Turkish goalkeeper (2-0, 70th). At the edge of the abyss, the Rennais tried to come back but Laborde stumbled on Samba while Sulemana found the bar. The goal of the former Montpellier player from a tight angle during added time changed nothing (2-1, 90th + 1). We will have to rely on Lens!

We had a match of rare intensity. Both teams spent a lot of energy from the first to the last minute in a very nice atmosphere. However, the first period was very closed, with few chances, something that was not the case at all after the break with plenty of opportunities on both sides. A really, really good Ligue 1 game.

– Shifted to the left by Gradit, Fofana provokes Dou whom he eliminates after a series of stepovers. On his right foot, the Ivorian midfielder unleashes a powerful curling shot from 25 meters to deceive Alemdar on his left (1-0, 66th).

– On the right, Sotoca slips a nice deep pass for Openda. Late, the Belgian striker took advantage of an error of judgment by Rodon to put his foot forward and deceive Alemdar (2-0, 70th).

– Launched in depth by Abline, Laborde struggles to recover the ball after a poorly controlled tackle from Gradit. From a tight angle, the Rennes striker landed an unstoppable shot under Samba’s bar (2-1, 90’+1).

Maxifoot has assigned a score (out of 10) comments on each player.

The Belgian striker was clearly the most impactful player on the Lensois side. Always active, he multiplied calls in depth and never hesitated to withdraw to participate in the collective effort. It was on a new sharp race that he scored the break goal, showing tenacity to take advantage of a misreading by Rodon. A full match for the new strongman of the Lensoise attack. Replace 76th minute with Ignatius Ganago (not not).

Brice Samba (6): a solid game for the Lensois goalkeeper. Vigilant on a stretched shot from Dou in the first period, he pulled out an incredible save on a pivot shot from Laborde. On the other hand, he could not do anything on the close range goal of the Rennes center forward in added time.

Jonathan Gradit (7): a good match for the central defender from Arts. He made several authoritarian but well-felt tackles to cut off opposing passes. It is also he who finds Fofana on the action of the first goal. Even if he poorly masters his tackle on the goal of Laborde, he answered present.

Kevin Danso (6): the Austrian has mastered Terrier well to prevent him from wandering around in the surface. He had a lot more trouble against a determined Laborde who set his entrance on fire.

Facundo Medina (6): some difficulties in the first period to block the starts of Doku. The Argentinian centre-back was pretty good, coming close to opening the scoring with a header after the break.

Przemyslaw Frankowski (5): a tone below. The Polish side was much less sharp than usual. Defensively, he struggled on Doku’s breakthroughs. Replace the 87th minute with Jimmy Cabot (no not).

Salis Abdul Samed (6): the Ghanaian midfielder struggled in the first half. If he was sharp in the duels, he should have been warned before the break for a gross foul on Doku. He raises the bar in the second half with constant pressing.

Seko Fofana (8): the Ivorian midfielder has grown to deliver his team on an extraordinary goal both in technique and power. He behaved like a boss to allow his team to get rid of Rennes.

Deiver Andrs Machado (6): the Colombian left side does not lack tone and has multiplied the tumbles in his lane. He had a hell of a duel with Traor, which he nevertheless had trouble overcoming. Replace the 87th minute with Massadio Hadara (not not).

David Costa (5): a disappointment. The Portuguese playmaker weighed little in this game. It was rather well contained by the Breton block. Replace 76th minute with Wesley Said (not).

Florian Sotoca (6.5): as usual, the artsian striker gave a lot to wear down his opponents. It’s a nice curved pass that allows Openda to double the bet. A game of duty. Replace the 82nd minute with Patrick Berg (not).

Dogan Alemdar (5): author of a fine save in front of Openda after returning from the locker room, the Turkish goalkeeper could not do anything on Fofana’s cannon shot. He is also not helped by Rodon on the second Lensois goal.

Hamari Traor (6): the Malian right side had a client with Machado. He fought a hell of a duel with his vis–vis, which he finally managed to contain. However, we can blame him for a lack of audacity offensively.

Joe Rodon (4): an average hour of play. Before the big blunder. On an error of judgment on a pass from Sotoca, the Welsh central defender let Openda slip his foot to make the break. An action that definitely weighs down Rennes.

Arthur Theate (7): big match for the Belgian central defender. The former Bologna player has always read the passes in depth towards the Lensois attackers by multiplying the interventions muscles but always clean. Even in the storm, he held on to secure his area.

Adrien Truffert (6): defensively, the left side was good with a double save just after the break. On the other hand, he, like Traor, was too timid in attack. Replace the 83rd minute with Birger Meling (non not).

Dsir Dou (5.5): the young talent from Rennes was not coldhearted as the most dangerous player in the first period with a nice stretched shot captured by Samba. At the origin of a great opportunity for Laborde, the Rennais will long remember the broth he took on the goal of Fofana. Replace the 82nd minute with Matthis Abline (not not).

Baptiste Santamaria (5): a complicated evening for the Rennes midfielder. He never had the desired influence to allow his partners to play higher, especially in the second period. Disappointing.

Flavien Tait (6): an interesting performance for the midfielder passed by Angers, who knew how to manage the tempo to prevent the game. He was one of the few to be regular in this match.

Benjamin Bourigeaud (5): defensively, the midfielder passed through Lens gave a lot. But up front, he didn’t weigh at all, and that was evident for more than an hour with a lack of fluidity in Rennes’ offensives. He came out very nervous. Replace the 71st minute with Kamaldeen Sulemana (not not)who touched the bar with a nice curling shot.

Martin Terrier (3.5): the Breton striker missed his match. Perfectly padlocked by the Lensoise defence, the Rennes centre-forward barely touched the ball in the opposing box apart from a soft shot shortly after the hour mark.

Jeremy Doku (4.5): an irregular performance for the Belgian winger, who set fire to the Lens defense only twice. Apart from these bores, we hardly saw him. Replace the 61st minute with Gatan Laborde (not not)who set fire to his in-between, finding the flaw in injury time.

+ Find the results and the classification of Ligue 1 on Maxifoot

And for you, who were the best and worst players of the match? Comment in the “comments” box below! 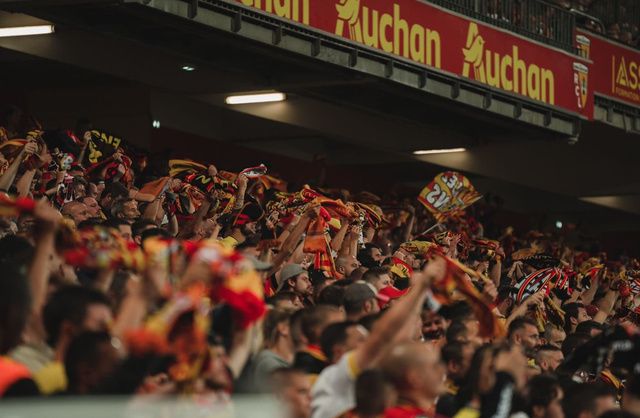 Belgian duel between Theate and Openda 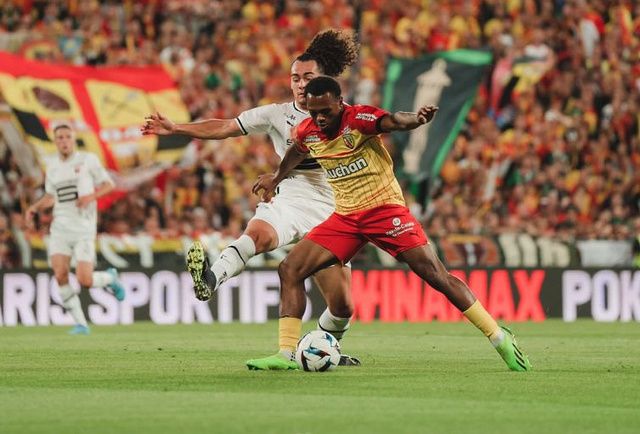 The joy of Samba on the goal of Fofana 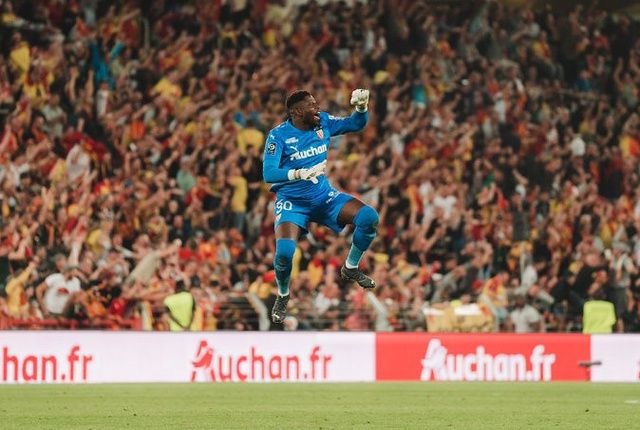